We call ourselves fearless and adventurous, but when it comes to writing a check we’re a hive mind of groupthink and tightfistedness. Cheap motorcycles scare us, which stands to reason. But if fun-loving Caifornians in the ‘60s hadn’t taken a flier on small, affordable bikes, who knows what would have happened to the American motorcycling landscape? Risk, even on the salesroom floor, is also part of the ride.

Much of what we love about riding is all about minimalism, the wind in our face, nothing on the bike or in our pockets that doesn’t make life more fun, etc. Cost considerations are often part of that minimalist charm. And minimal prices are the point of entry for most new riders. Better for a novice rider to get a new motorcycle than add wrenching and troubleshooting to their limited résumé.

So we’ve come from the entertainment of the Top 5 Most Expensive Motorcycles 2022 to an informational look at the five least expensive motorcycles on sale. Some carry a bit of risk and unknown reputation, some not. But if you pull the trigger, you get a brand spanking new ride, with dealer papers and everything. And you get the (relative) peace of mind of a maintenance-free way to enjoy riding for a few seasons. 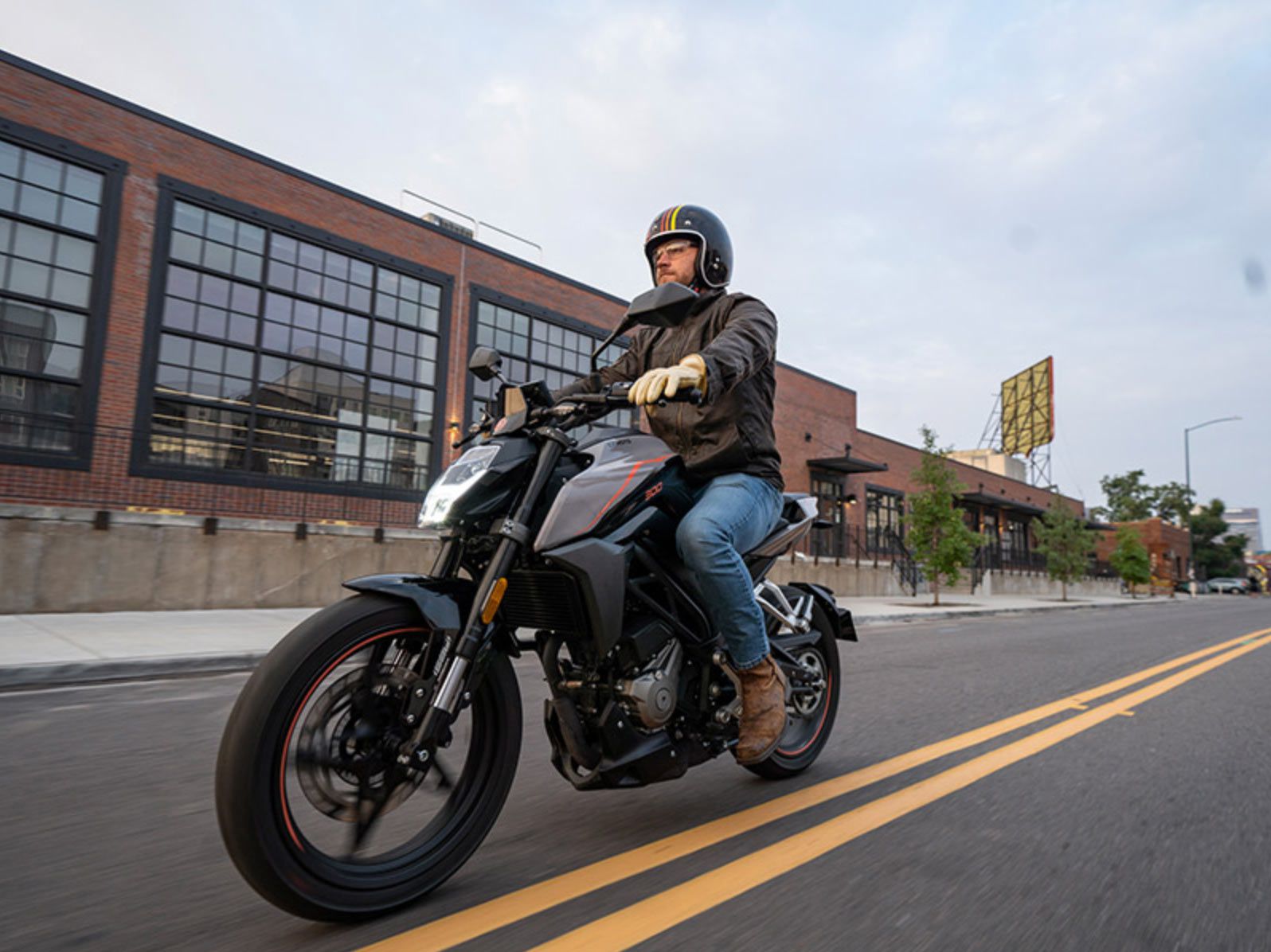 For a country with a ridership that far surpasses any Western nation, you’d think Chinese motorcycles would get the benefit of the doubt. Two-wheeled transportation is still a practical affair in much of the country. But Chinese-made motorcycles are sometimes eyed with suspicion. Quality, dealer support, and fair (or unfair) reputations are all lingering question marks in the American market. But that price tag…$3,999. That’s just $200 more than a Honda Grom 125 ABS.

Founded in 1989 and based in Hangzhou, China, CFMoto makes side-by-sides and ATVs as well. And the CFMoto 300NK (Naked) gets you 29 hp at 8,750 rpm from a liquid-cooled 292cc single-cylinder engine fed through Bosch EFI. It pulls 18.7 pound-feet at 7,250 rpm with six speeds to heave its 333 pounds around. By all accounts, it’s a light, supercapable commuter. And it’s got a 5-inch TFT. And it has, on paper, quite a US dealer network. C’mon America, roll those dice. 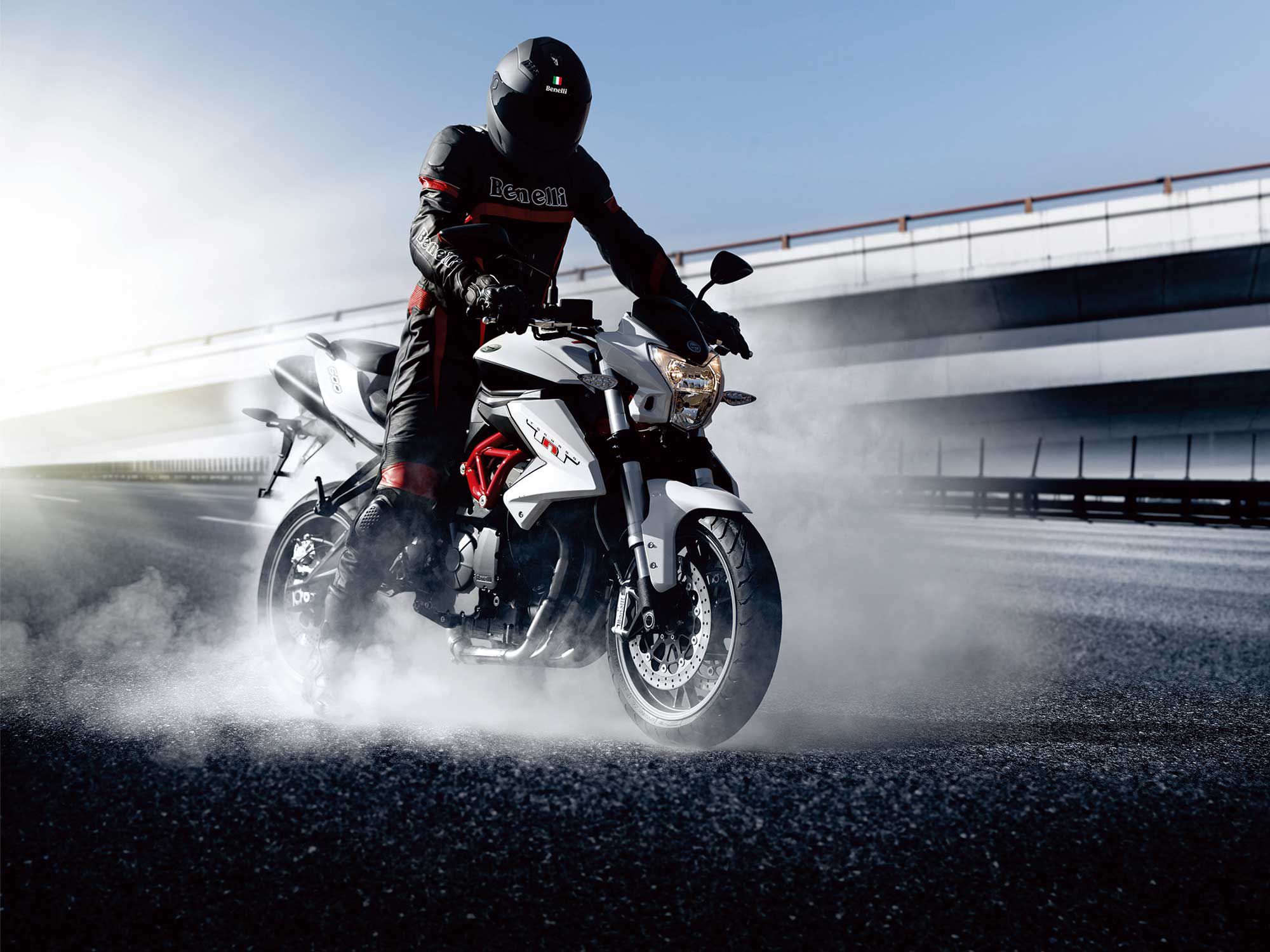 The Benelli TNT 600 putting down some liter-beater smoke. (Benelli/)

Benelli was acquired by Chinese company Qianjiang Motorcycle in 2005. While some Benellis are still made in Pesaro, Italy (the Leoncino 500 and the TRK 500), the TNT 600 and TNT 135 wear the “made in China” badge. Assuming you don’t mind your motorcycle sharing the same origin as everything else in your house, you get 67 hp at 11,000 rpm and 35.4 pound-feet torque at 9,000 rpm. Weight has come down a bit, now settling at 459 pounds dry. That’s a bit more than the Honda CB650R, which also outclasses the TNT 600 in terms of ponies at 81. But as long as you don’t care which liter you beat, this Benelli might be for you. 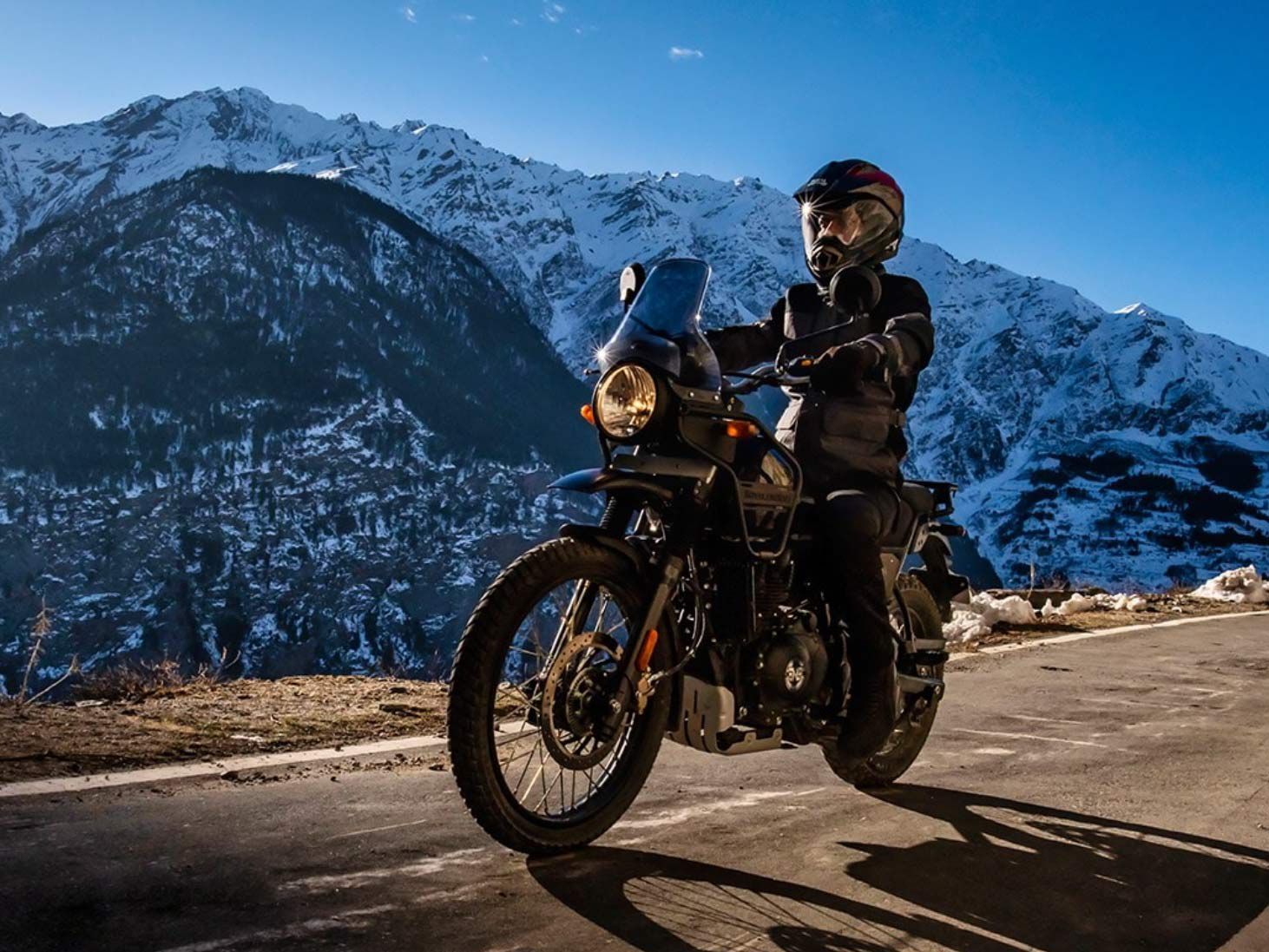 The Royal Enfield Himalayan has been providing entry-level adventure fun since 2017. (Royal Enfield/)

Don’t think the Himalayan is a true adventure bike? Plenty of ADV riders aren’t really ADV riders, either. They don’t need a beast of a 900cc twin (or triple) rig that also can’t fight its way through sand whoops with dirt acrobatics. What they do need is an inexpensive place to mount impressive amounts of luggage and a soft landing as far as a price point. Enter the Royal Enfield Himalayan.

Royal Enfield’s been on quite a tear of late. Since firing up its Milwaukee-based North American headquarters in 2016, a steady stream of fun, inexpensive, midsize motorcycles have found their way to American buyers. A mere $5,299 buys you a lot of bike, and with the money left over, you can treat yourself to a few posh hotels or decent meals on your way to whatever adventure you’re on. The 31.5-inch seat height, 439-pound curb weight, and a friendly 411cc thumper with 24.3 hp all add up to one thing: a great start to a budding ADV addiction. 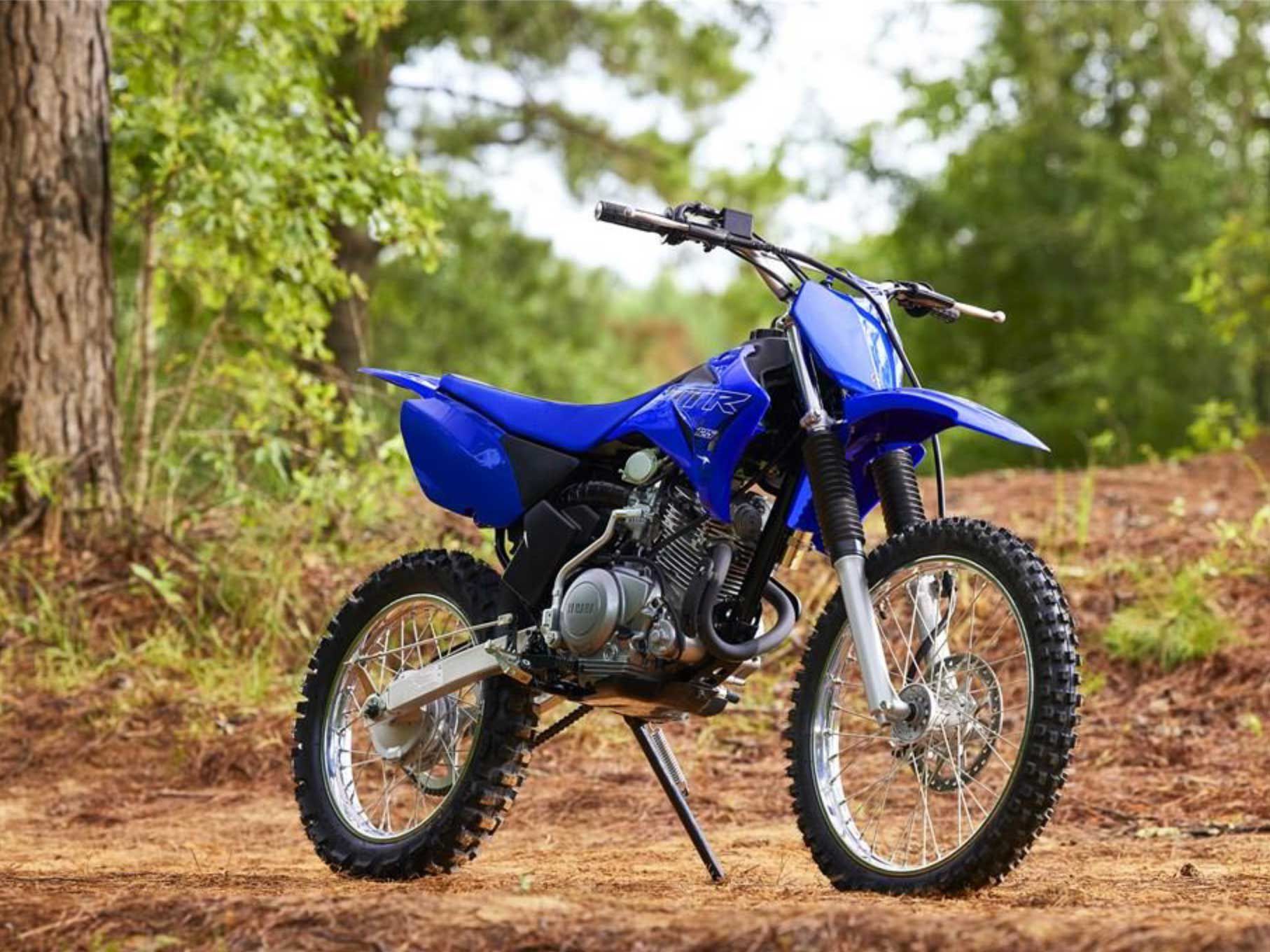 One of the cheaper ways to get lost in the woods—the Yamaha TT-R125LE. (Yamaha/)

In the world of motocross and off-road trail riding, dirt often hurts. But damage to wallets can be light, thanks to the Yamaha TT-R125LE. All four familiar Japanese brands weigh in their 19-inch/16-inch-wheeled dirt bikes for novices. Honda has the venerable CRF125F Big Wheel, Suzuki has the DR-Z125L, and Kawasaki has its KLX140R L. But the TT-R125LE nips the Suzuki by a mere $50 at the MSRP line.

You get 7.1 inches of travel in the front and 6.6 inches in the rear, with a hard-working air-cooled four-stroke 124cc thumper keeping things moving. Dimensions are virtually identical with the DR-Z125L, with the exception of Yamaha’s slightly larger fuel tank (1.6 gallons versus 1.3) and slightly more ground clearance (11.6 inches versus 11.4). The Yamaha also bests the Suzuki in seat height (31.7 inches versus 32.0). As mentioned earlier, even the price is of negligible difference, just $50. But that’s enough for your copay when you get dropped off at the ER, so there’s that. 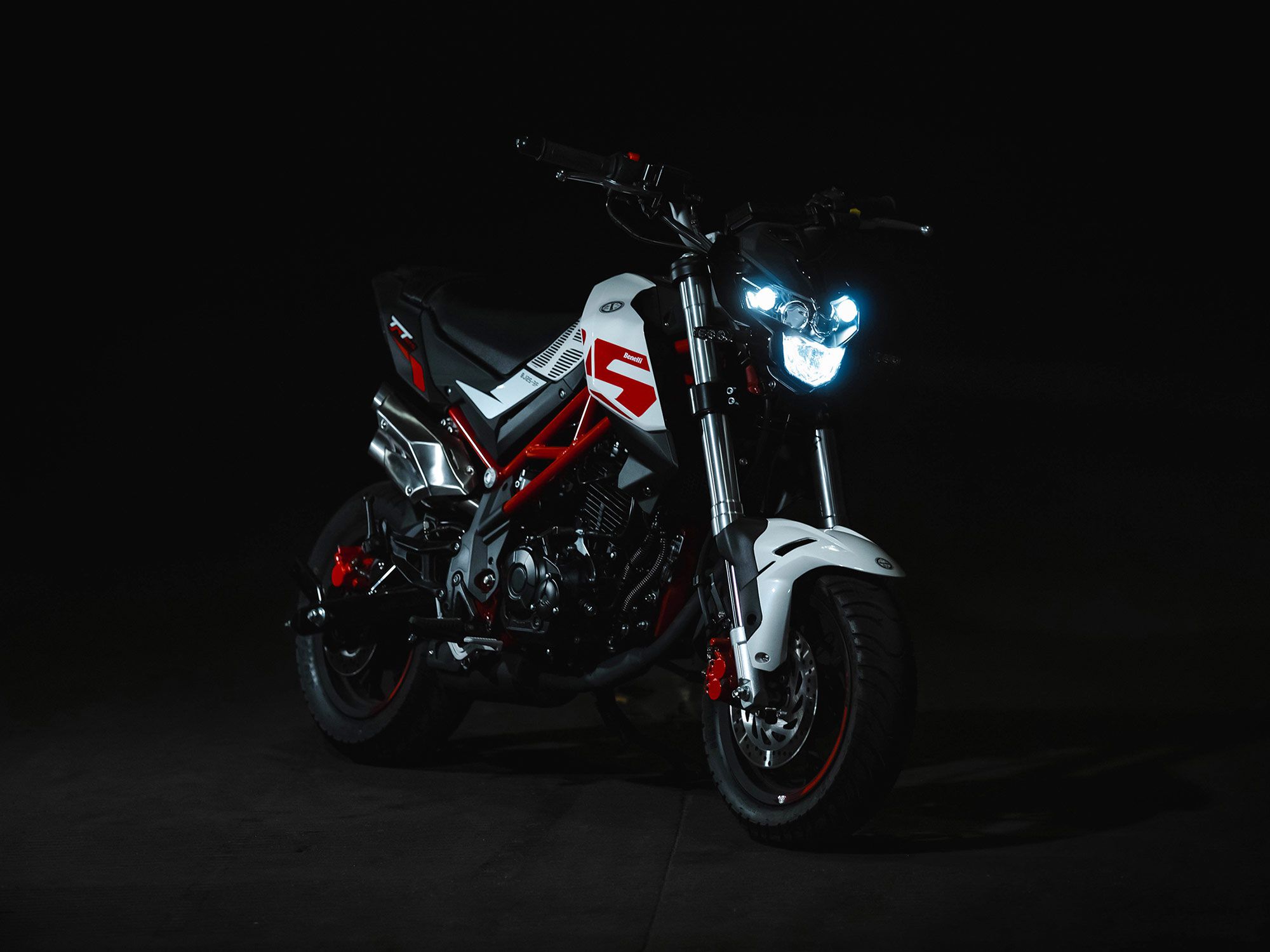 Time to crash the Grom party? The Benelli TNT 135. (Benelli/)

Folks love the Groms and Z125s. Insane fun and hooliganism are self-explanatory. But their small size belies a fairly pricey MSRP considering their limited range and use value. How about more cc’s and less of an MSRP? Meet the Benelli TNT 135. As mentioned earlier, Chinese capital has breathed new life into a classic Italian marque, giving us intriguing new models like this: an oil-cooled single-cylinder 134.7cc party whistle with aggro-looking pipes. It’s a mere $2,999, $500 less than a Grom and $400 less than a Kawasaki Z125 Pro.

Back to the Benelli. With the TNT 135, you get 11.3 hp to tool around on, rather than the Grom’s puny 9.7 hp. That’s 1.6 hp or 16 percent more ponies, mathematically speaking. Of course, you’re pushing around 32 more pounds of mini-motorcycle. But you’re on a 135, not a 125. The stylish decals mention this prominently. The Grom sheepishly omits any mention of 125 on the otherwise fine bodywork design. And as the name implies, the TNT is an explosion of performance and/or savings. Electrical gremlins have been reported, but the TNT 135 is now in its fourth year of production, so various forums should have plenty of useful tips and tricks.