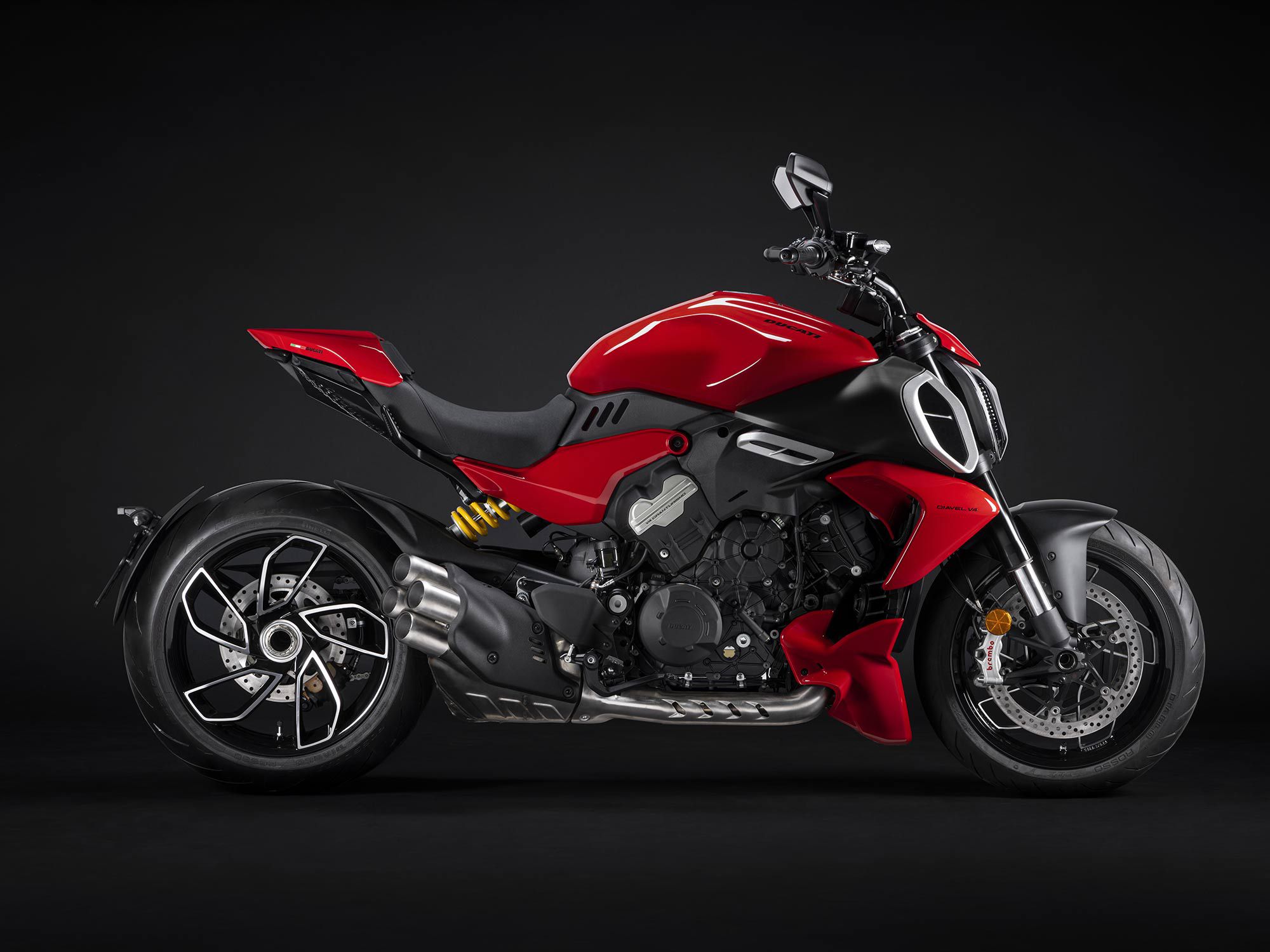 While instantly recognizable as a Diavel, the V4 has entirely new styling compared to previous generations. (Ducati/)

If you’re a shrinking violet who shuns attention and would rather blend into the background than gather a crowd, the Ducati Diavel isn’t the bike for you. This is one of the most head-turning two-wheelers ever made and the latest iteration gains Ducati’s high-tech Granturismo V4 engine in place of the desmo V-twin of its predecessors. It’s a bold move from a company that until recently was so wedded to the V-twin format that any other engine was nearly unimaginable, but if the Diavel V4 can combine the remarkable mix of stance, handling, and performance of its predecessor with the success that the V-4 engine has brought to the Panigale, Streetfighter, and Multistrada lines, then it’s likely to be a landmark model in the firm’s history. A four-exit exhaust is one of the key visual identifiers of the Diavel V4. (Ducati/)

The Diavel has always been a remarkable machine. Despite appearing like it’s inspired by such bikes as Yamaha’s VMAX, its lack of weight and impressive handling and braking mean it defies preconceptions about being a one-trick pony that can only shine in a straight line.

The latest V-4 version follows in its forebears’ footsteps, but its achievement is even more impressive. Despite two extra cylinders and a substantially bigger fuel tank than the old Diavel 1260, the Diavel V4′s fully fueled weight is 24 pounds lighter than its predecessor.

With styling that evolves the original Diavel’s themes, concentrating the visual mass of the bike even more noticeably toward the front thanks to the densely packed V-4 powertrain, plus standout elements like the four-exit exhaust and taillights made of dozens of tiny LEDs shining through honeycomb-style holes under the tail, there aren’t many bikes that will attract as much attention and have the ability to back up their appearance with real-world performance to match. 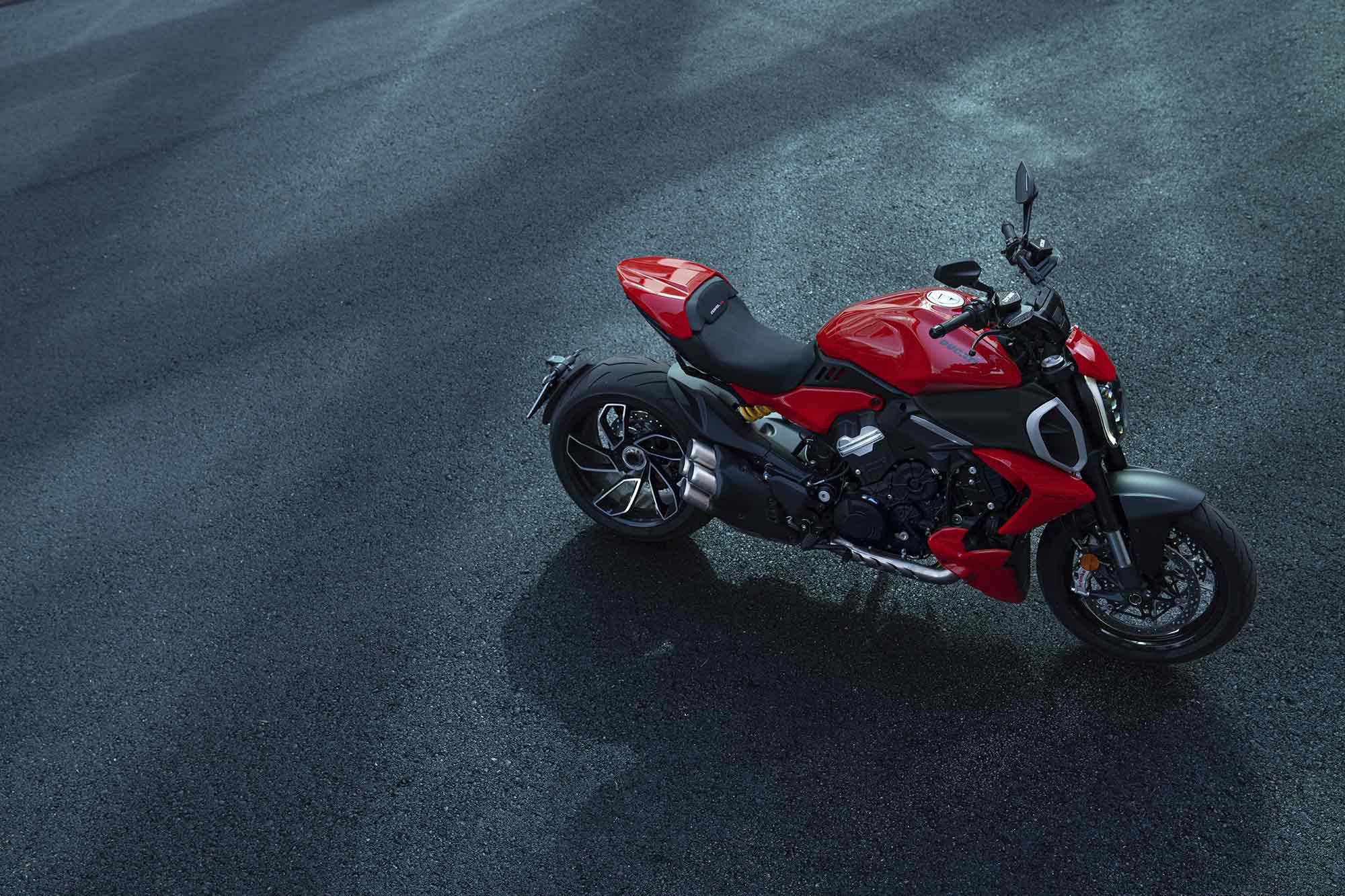 Despite the evolutionary nature of the styling updates, everything about the Diavel V4 is new for 2023. The engine is a modified version of the spring-valve Granturismo V4 that first appeared in the Multistrada, slung under a new frame and ahead of a redesigned single-sided swingarm.

High tech has become a Ducati calling card over the last few years, and the Diavel V4 is no exception, with an evolution of the cylinder cutout system that first appeared in the Multistrada, so the 1,158cc V-4 can operate as a 579cc parallel twin, running the front cylinder bank only at low speeds to help improve economy, emissions, and prevent heat-soak reaching the rider. 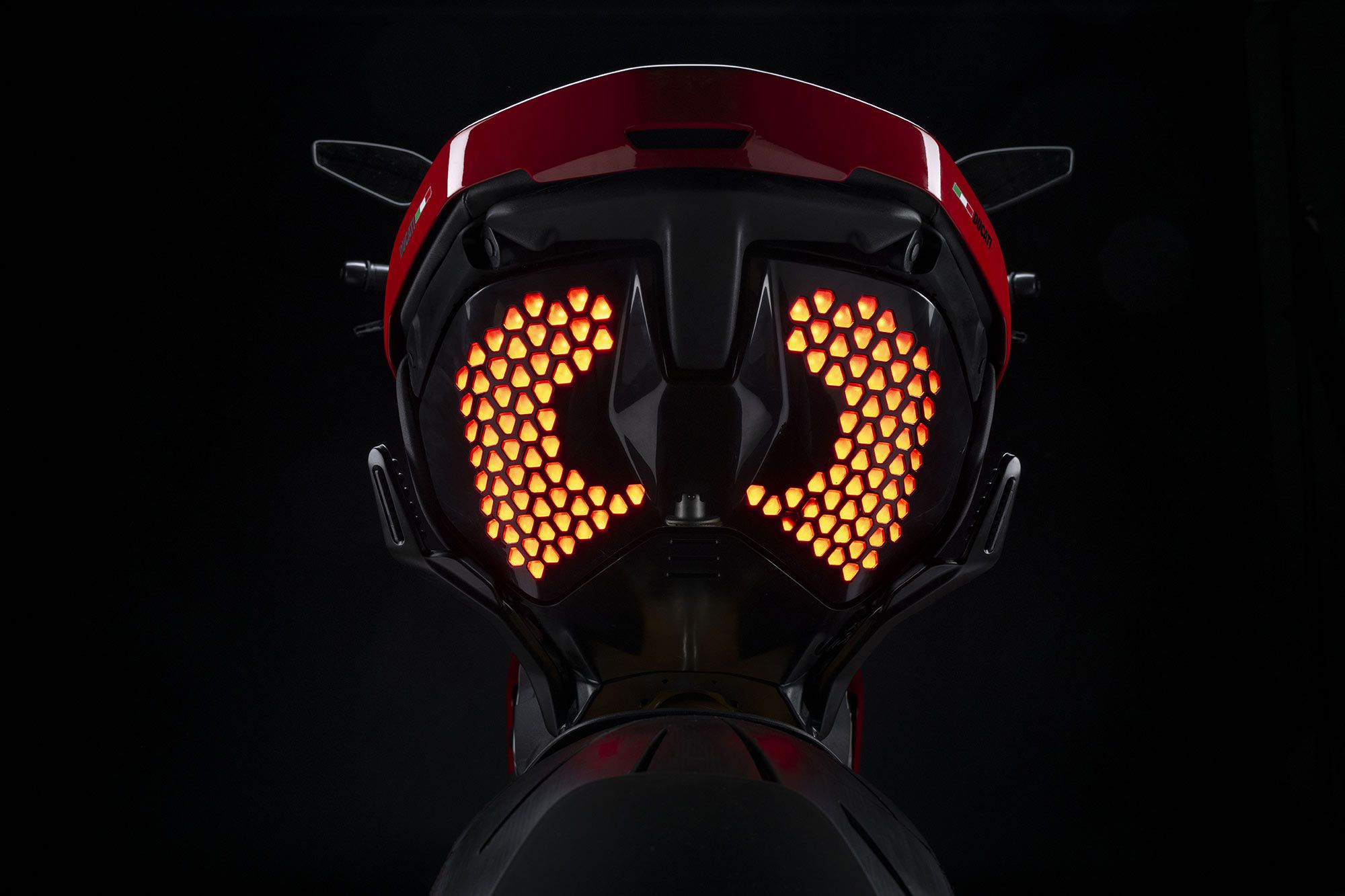 Ducati isn’t afraid to push the limits when it comes to styling, especially on the Diavel. Taillights are made of dozens of tiny LEDs shining through honeycomb-style holes under the tail. (Ducati/)

The closest rivals to the Diavel V4 are within Ducati’s own range, with the V-twin-engined Diavel 1260 offering similar outright performance and the XDiavel lineup adding a lower, more cruiser-style look but with similar themes.

Away from the Ducati family, competition to the Diavel depends on your priorities. If you want to turn heads and enjoy huge globs of torque, Triumph’s Rocket 3 R has to be an option, though it’s a much heavier, larger bike overall. At the other end of the scale, if you prioritize performance, individuality, and handling but are prepared to compromise on appearance, Kawasaki’s Z H2 could be on your shopping list. 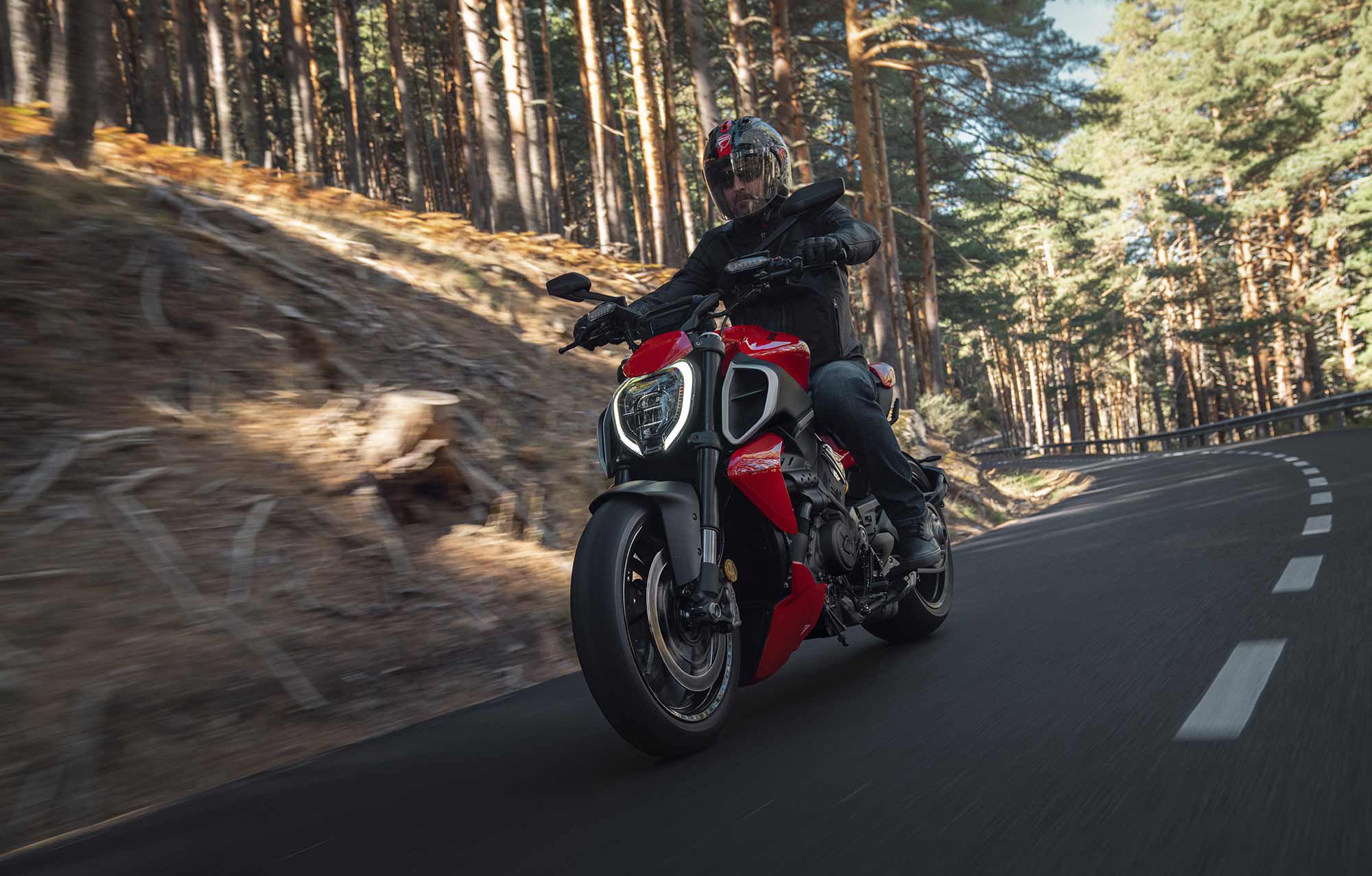 Few bikes will attract as much attention as the Diavel V4, and have the ability to back up their appearance with real-world performance to match. (Ducati/)

While Ducati has proved it’s more than capable of making insane amounts of power from its V-4 engines, the Granturismo version doesn’t try to set new records for outright performance. At a claimed 168 hp, it makes 11 hp more than the Diavel 1260, while the 1,158cc V-4′s 93 lb.-ft. of torque lags slightly behind the 95 lb.-ft. of the larger 1,262cc V-twin.

Unlike the Desmosedici Stradale V4 used in the Panigale and Streetfighter, the Granturismo V4 uses conventional valve springs instead of the desmodromic system, moving away from a setup that’s been a Ducati signature since the ‘70s, but it gains the same cylinder cutoff system used in the Multistrada V4, extended and expanded for 2023 with the ability to ride at low speeds using just the front cylinder bank (the first version of the system operated only when stationary at idle).

As well as saving fuel, the system helps stop your legs from getting baked by the rear cylinder bank’s heat while stuck in traffic, and while the switchover between two- and four-cylinder modes happens automatically, Ducati has ensured there’s a distinct change in exhaust note as it does so.

It drives through a slipper clutch to six-speed box with a standard up-and-down quickshifter as standard equipment. 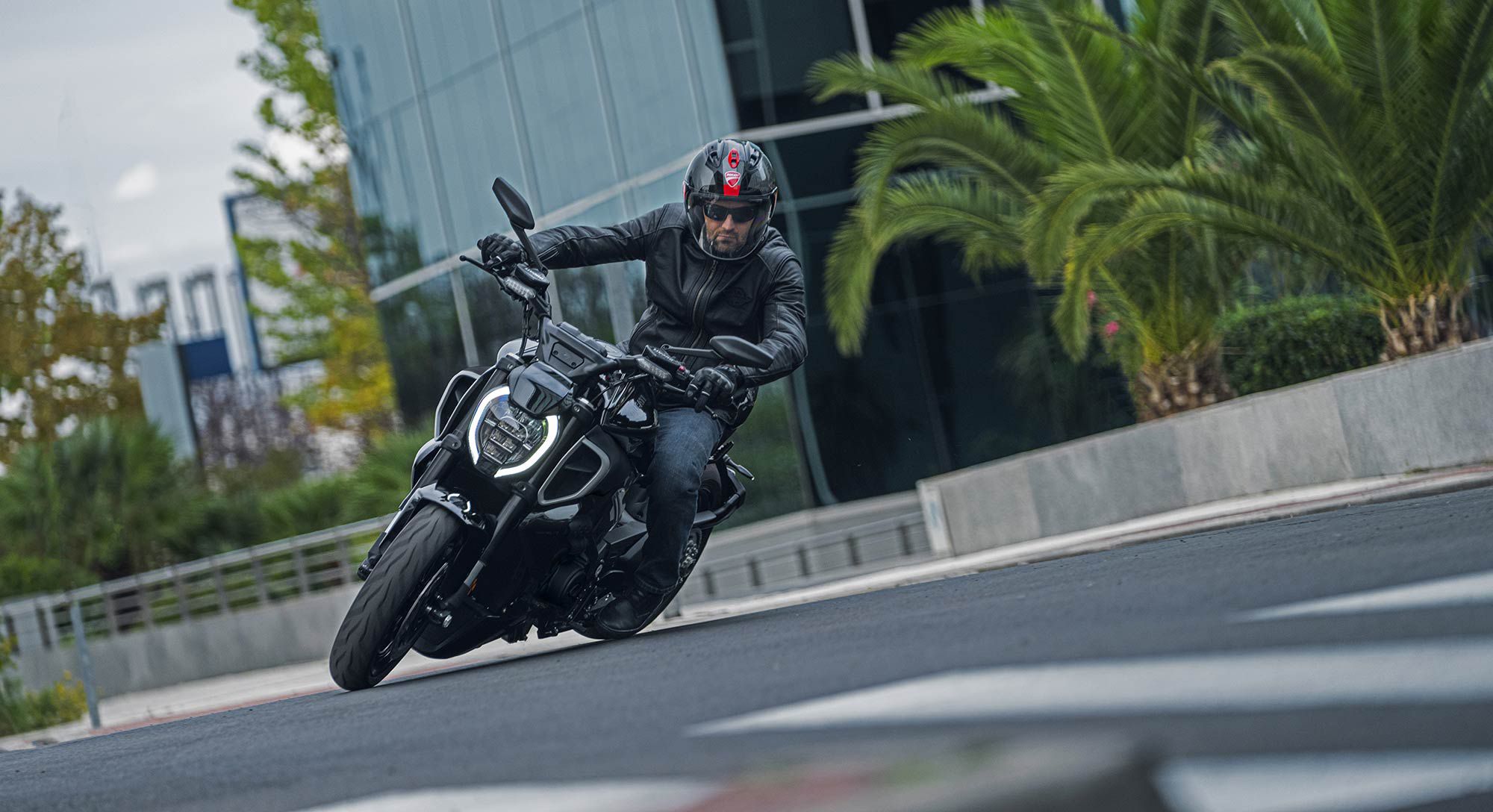 The Diavel is built for more than just cruising the open highway. (Ducati/)

The chassis is completely new to suit the V-4 engine format, using an aluminum monocoque front frame section bolted to the top of the engine, which itself doubles as a structural component. At 26 degrees, the rake is steep for this sort of bike—a degree less than the Diavel 1260—and there’s less trail and a shorter wheelbase than the V-twin too. The bike’s physical mass is shifted forward, along with the rider, to put more emphasis on the front wheel.

That wheel is slung between a fat, 50mm fully adjustable USD fork, matched to a piggyback monoshock at the rear, again fully adjustable and acting on a single-sided cast alloy swingarm. At the back, a huge 240-section Pirelli Diablo Rosso III tire carries on the Diavel tradition of using oversized rear rubber to emphasize its accelerative potential. According to Ducati, that means 0–60 mph in under three seconds. 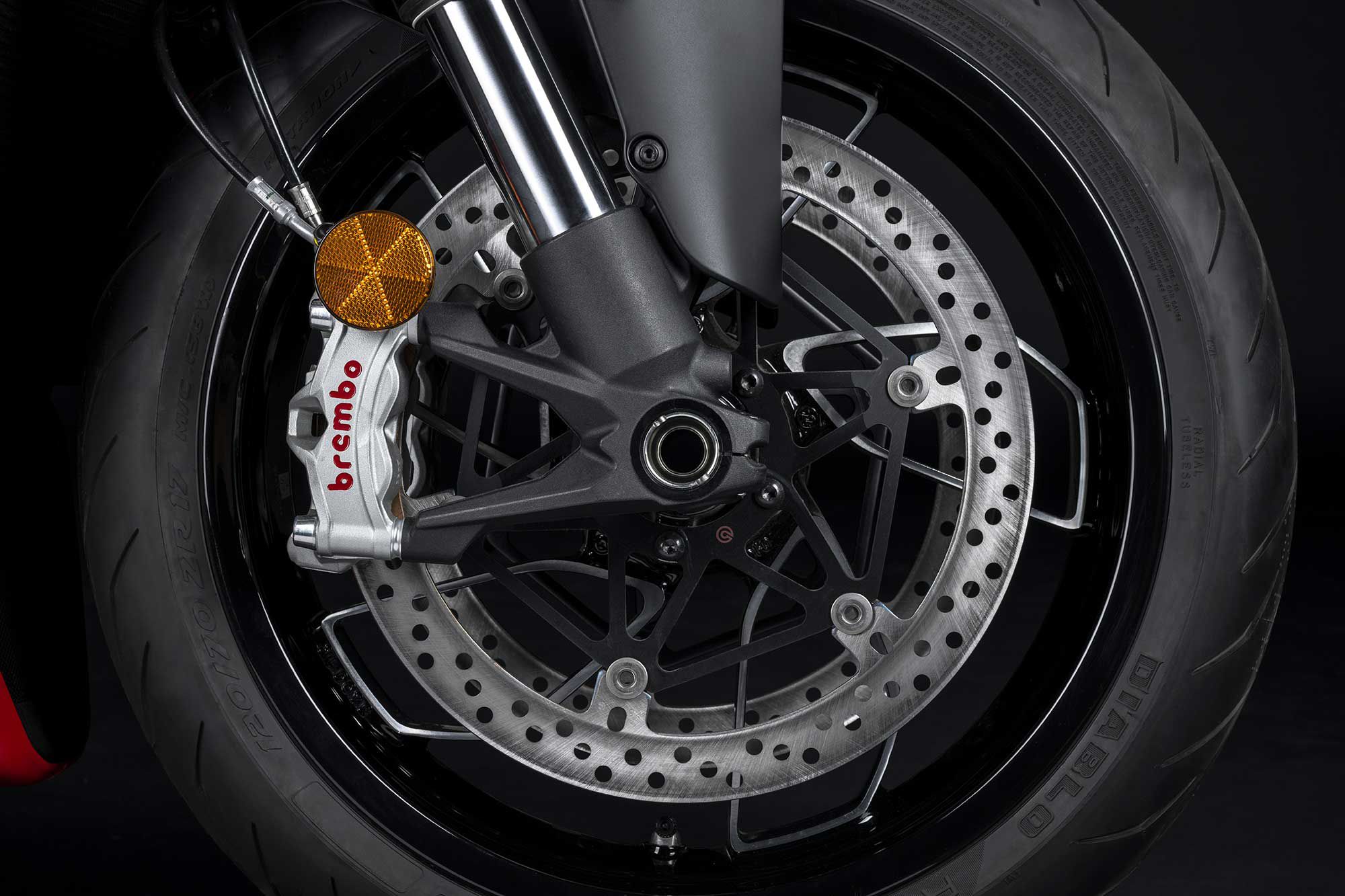 Brembo Stylema four-piston radial calipers are intended to offer all the stopping power needed to get the Diavel V4 slowed down. (Ducati/)

With so much acceleration on tap, slowing down is equally important and the Diavel achieves it via Brembo Stylema four-piston radial calipers at the front, acting on two 330mm discs and assisted by cornering ABS. A 265mm disc and two-piston Brembo caliper help at the rear.

Ducati hasn’t announced US economy figures, but for the European-spec version of the Diavel V4, the numbers (6.4L/100km) translate to 36.75 mpg. With a 5.3-gallon fuel tank, up from 4.2 gallons on the Diavel 1260, that economy would give a potential range of nearly 200 miles between stops. 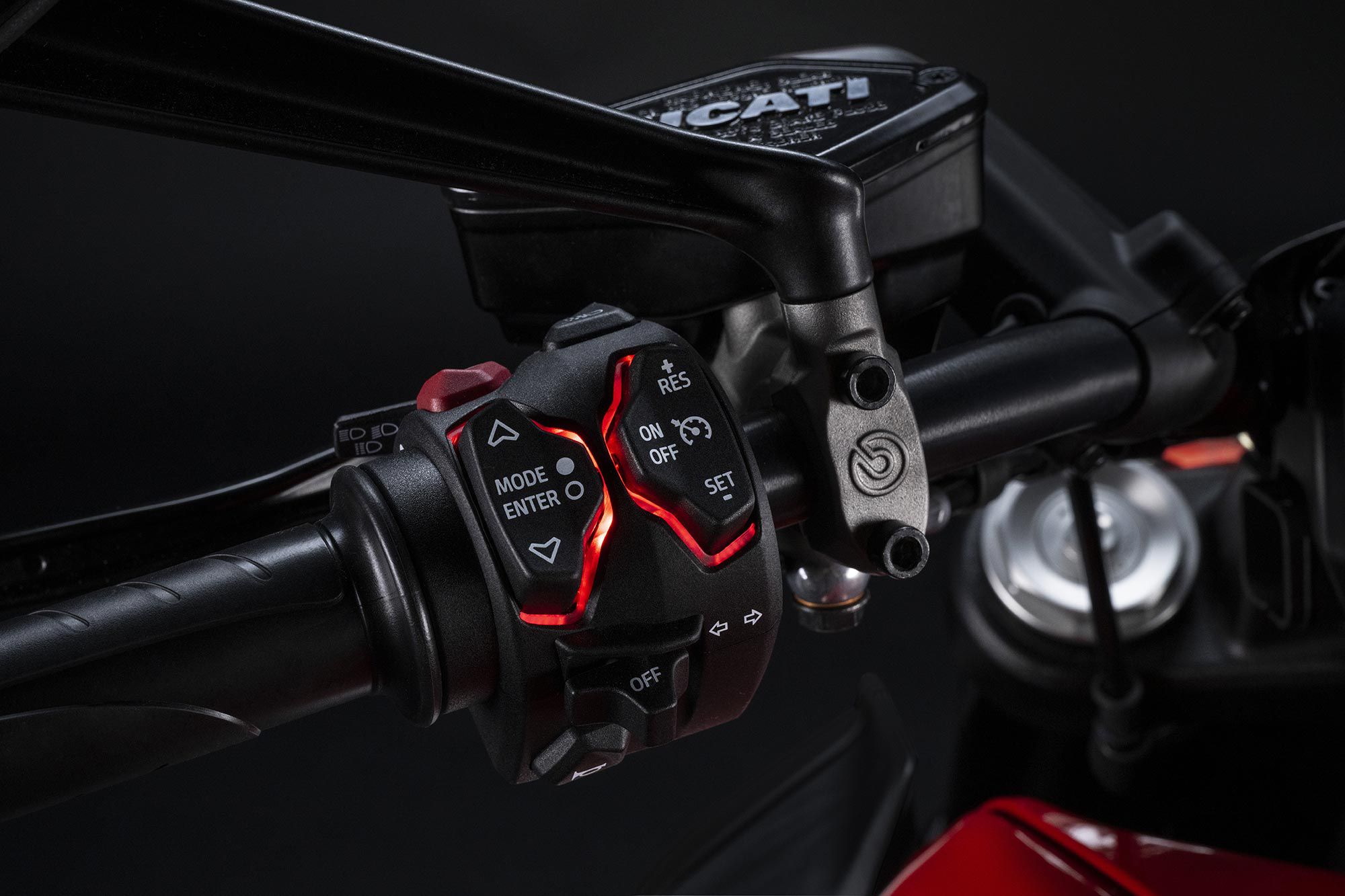 The Diavel’s upright riding position and wide bar, without the forward-mounted foot controls of the XDiavel, is a comfortable prospect, although the lack of a screen means that as speeds rise you’ll be battling against your own torso’s wind resistance. Despite the bike’s imposing styling, the seat is only 31.1 inches off the ground, making it a more attractive proposition than sportbikes or adventure bikes to anyone with a short inseam. Compared to the Diavel 1260, the shorter Diavel V4 positions you 0.8 inch closer to the bar.

Even passengers aren’t forgotten, with clever, foldaway pillion pegs that hide under the seat unit and a telescopic grab handle at the back, so they don’t mar the bike’s lines when you’re riding alone but are always there when you need them. 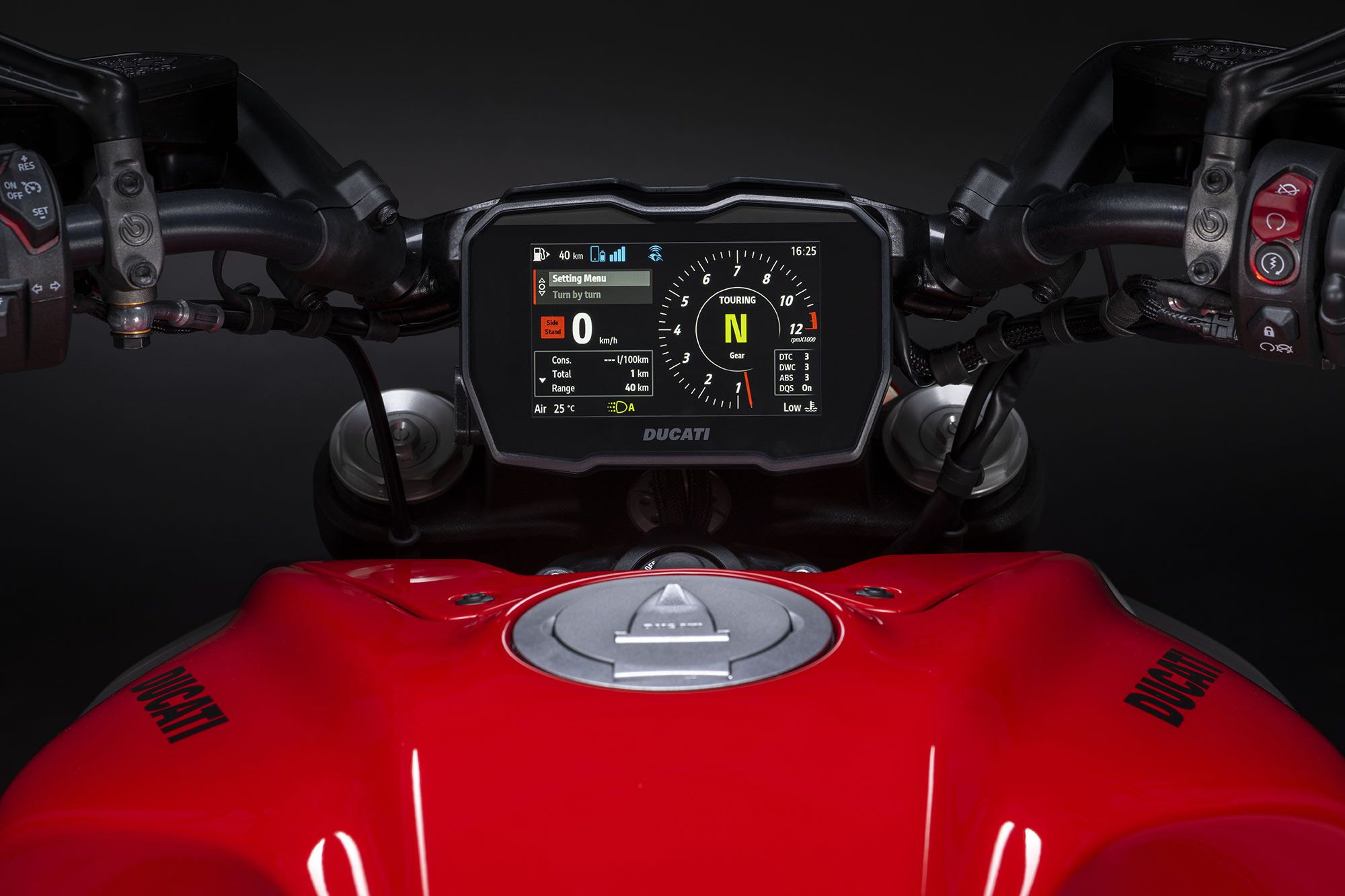 A full-color TFT display is well laid out, providing pertinent information in an easy-to-read format. (Ducati/)

Ducati has built a reputation for advanced electronics, becoming the first brand to offer cornering ABS as standard on all its models, and the Diavel is predictably packed with rider assists. As well as cornering ABS, there’s lean-sensitive traction control, launch control, cruise control, wheelie control, and a bidirectional quickshifter as standard. A color TFT dash provides access to all their settings—and there are a lot of them—as well as three power modes and four riding modes.

That TFT dash also gives you Bluetooth connectivity for smartphones for media control, with turn-by-turn navigation as an optional extra.

There’s a 24-month, unlimited-mileage warranty, and the Diavel V4 also pursues Ducati’s aim to reduce maintenance costs with 24-month or 9,000-mile service intervals, with the big service for valve clearance adjustment not needed until 36,000 miles.