Earlier this season, we test rode Moto Guzzi’s 2023 V100 Mandello S from the official international press introduction in the Mandello del Lario region of northern Italy. This is an all-new sport-touring rig for Moto Guzzi. Moto Guzzi has manufactured motorcycles out of its factory on the shore of Lake Como for more than 100 years. The 2023 V100 Mandello S ($17,490) is the first truly new and modern Moto Guzzi that we’ve seen in the company’s recent history.

Looking back a few decades, this V100 most resembles, in our minds, the Griso eight-valve that Guzzi offered. We loved that motorcycle and always wondered when it would get a revamp or a refresh. Although this V100 Mandello is positioned a little differently, it’s actually very similar in application.

The 2023 V100 features an all-new, water-cooled transverse-mounted 1,042cc V-twin. Unlike a traditional V-twin in which the engine is mounted underneath you with the front cylinder facing forward and the rear cylinder facing back, this engine is mounted sideways. The pistons are on either side of the motorcycle, much like a boxer twin from the Motorrad factory. But instead of the pistons working at an opposed angle, this is a V angle.

Moto Guzzi has done a number of really important changes to this iconic powerplant. First, the engine is significantly shorter than before. Those old, air-cooled Guzzis have long transmissions. Moto Guzzi was able to shave 4 inches off the depth of the engine from front to back. The cylinder heads have also been reconfigured. Historically, it had the exhaust aimed out from the front of the motorcycle. Now they are positioned at a 90-degree angle and exit from the side. The V-block is still positioned in a 90-degree orientation. Other improvements include dual chain-driven camshafts and adjustable ride-by-wire throttle.

We love that this 1,042cc engine offers loads of character. It still has a degree of Guzzi’s signature longitudinal rumble but it is less intrusive than past Moto Guzzis. The counterrotating crankshaft does a lot to make this motorcycle very nimble. This bike weighs 514 pounds with a full 4.5 gallons of fuel, but when we were riding around the shores of Lake Como, you would never know that this motorcycle weighed so much. It is very nimble and apt to change direction.

The roads in northern Italy are small and narrow. Typically you wouldn’t want to operate a 500-pound streetbike on these types of surfaces, but the V100 Mandello S, it offers excellent handling. We rode the up-spec S model, which adds $2,000 to the US MSRP. For that extra two grand you get semi-active Öhlins suspension and heated grips. There are also some nice styling touches that make that motorcycle stand apart from the base $15,490 motorcycle.

The Öhlins semi-active EC 2.0 suspension that a lot of high-end bikes employ nowadays performs well. It takes all the fuss out of having to adjust the damping of the fork or shock. You set it, you forget it. Of course, the suspension is tied to each of the four riding modes—Rain, Touring, Sport, and Road. Each setting delivers a different ride quality. We prefer the Sport riding mode. It offered the most intimate throttle response, and made that V100 really fun to ride on the back roads around Lake Como.

Ergonomics-wise we appreciated how narrow it felt between our legs. Even though it’s a 500-plus-pound bike, it doesn’t look or feel that large. It’s nice and compact from front to back and fairly narrow in terms of width. It’s a good urban touring bike. It’s the type of bike that you can be comfortable on and still have a good degree of maneuverability in the city, yet if you wanted to, you could fit the OE accessory hard cases ($849.50) and go on light touring missions. The electronically adjustable windscreen is a handy feature with adequate range of adjustment.

The aerodynamic features include louvers that open when you are at speeds over 45 mph in the touring setting. These louvers are designed to reduce the turbulent air inside the cockpit, and reduce the amount of precipitation that comes in the cockpit when riding in the rain. It’s also worth noting that when operating the vehicle in Rain mode, the louvers are open to deflect some of the water off your body. We think it’s a neat concept. The louvers open and close very seamlessly and certainly look cool. It’s a very neat feature, but the actual application of them? It’s kind of silly to us. I don’t think it really made much of a difference when riding. It’s worth noting that Moto Guzzi did wind tunnel testing on the aerodynamics package on this vehicle. Moto Guzzi had a wind tunnel at its historic factory in northern Italy, but that tunnel has since retired. Now the company leans on the Piaggio Group wind tunnel.

The V100 is a real head-turner—especially in its premium green paint (S model). We like that this motorcycle has a shaft final drive. Moto Guzzi did some proper engineering so it doesn’t have a lot of jack effect. When you apply throttle, it drives forward smoothly and feels natural. It feels much like a conventional chain final drive motorcycle, except there is no chain to clean and adjust. Of course, you’re going to have to service the shaft drive mechanism intermittently, but that’s one of the ownership costs of shaft final drive.

Triple disc hydraulic brakes on this bike keep speed in check. We appreciate the large and strong rear brake. It also has ABS, which you can turn off if you want to do some slides. Another neat feature is it’s the first Moto Guzzi that we’ve ridden recently that employs a modern-feeling clutch. Moto Guzzis have historically employed vague-feeling dry clutches that are difficult to modulate. This V100 has a hydraulic clutch with pleasing lever feel. The S model we operated was fitted with an electronic quickshifter. It was lazy in terms of its actuation and we wish it had faster programming. But then again, this is Moto Guzzi’s first try at having an electronic quickshifter. So we’ll let it slide…

Keeping tabs on everything is the Piaggio Group’s now signature 5-inch color TFT display. This display was originally fitted on the 2021 MY Aprilia RSV4 superbike and the Tuono naked bikes. This user interface is a tremendous improvement from where Piaggio Group and Moto Guzzi were before. Still, the fonts could be larger. It’s hard to see some of the settings when you’re riding. The switch gear is also nice, but it could benefit from better tactile feel. Still, it is a big improvement from previous Guzzis.

The sound and character of this twin make it a hoot to ride. It pumps out right around 115 hp, claims Moto Guzzi. It’s not the fastest thing on the road, but it’s enough to get the blood pumping and have some excitement, especially on slow- to medium-speed roads. That’s where this bike really excels. We appreciate that the engine doesn’t vibrate excessively, and doesn’t throw off a ridiculous amount of heat onto your feet. Riders will feel a bit of engine heat, especially when you’re riding at slower speeds inside the confines of a city, but it’s definitely not too much.

Overall our initial impression of the 2023 V100 Mandello is favorable. It’s nimble; it’s got decent power; the clutch works well; the brakes are sharp. And it has a lot of amenities, like heated grips, like an electronically adjustable windscreen and semi-active electronically adjustable suspension, plus a USB charging point. It feels and looks more modern than previous Moto Guzzis and the engine doesn’t have an awkward lateral roll. On the flip side, the aerodynamic louvers; they’re cool but they’re kind of silly at the same time. And the fonts on the instrumentation could be larger. But if you’re seeking a motorcycle that has a classic style and character that only Guzzi delivers, with modern amenities, we think you’re to be happy with the V100 Mandello S. 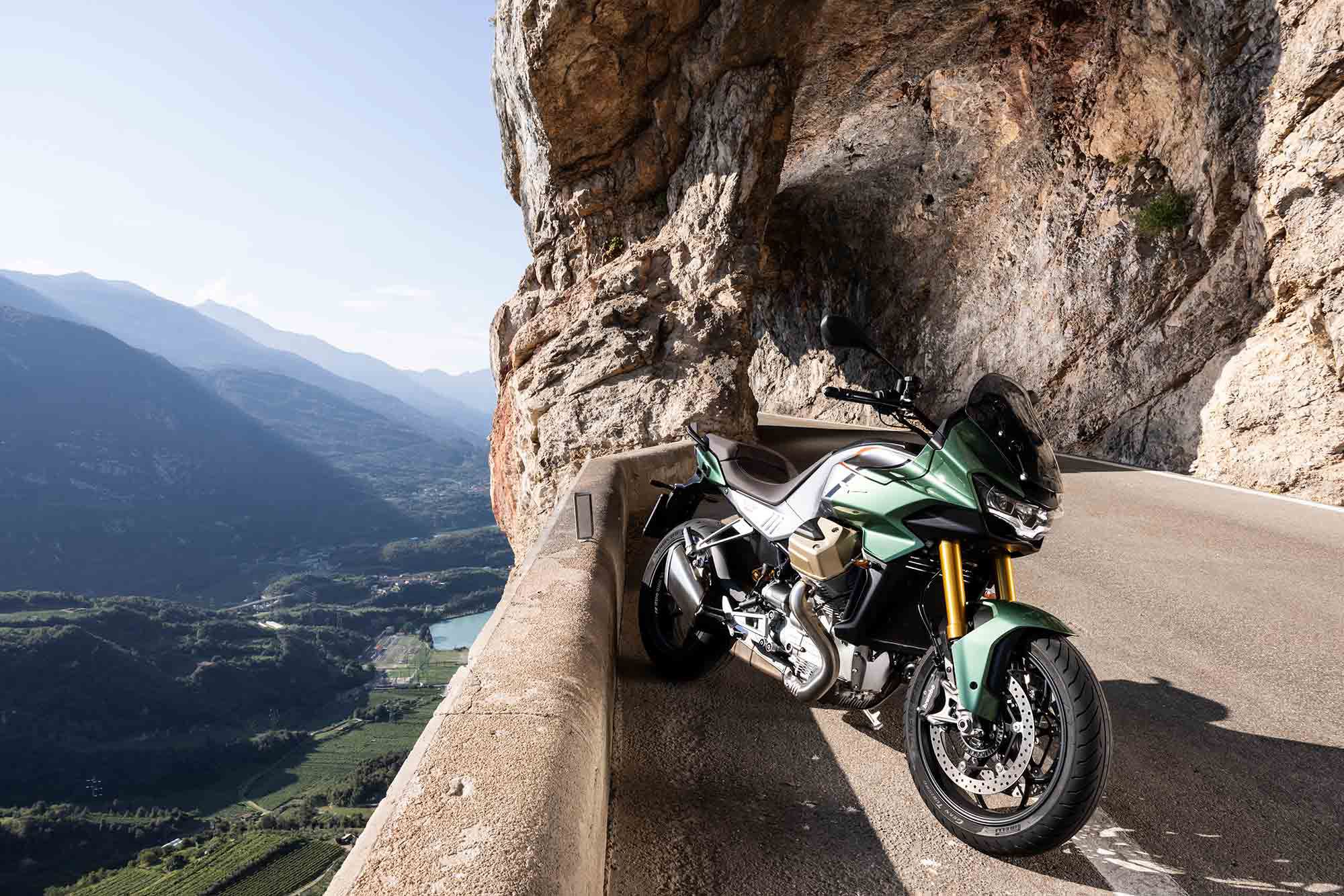 Moto Guzzi adds an all-new sport-touring rig to its US model lineup for 2023. (Piaggio Group/) 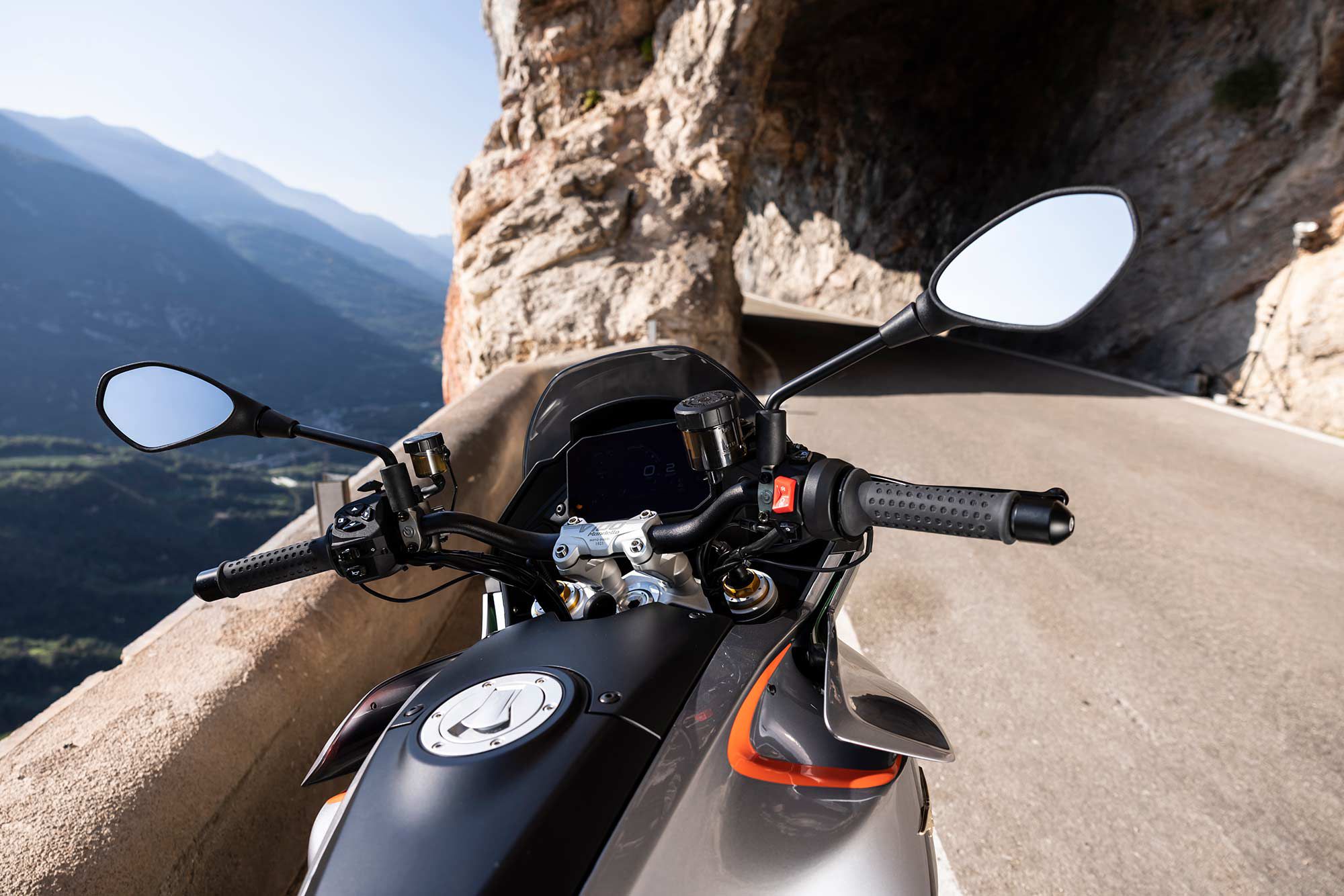 The Moto Guzzi V100 Mandello S features a well-proportioned cockpit that will be appreciated by riders of any size. (Piaggio group/) 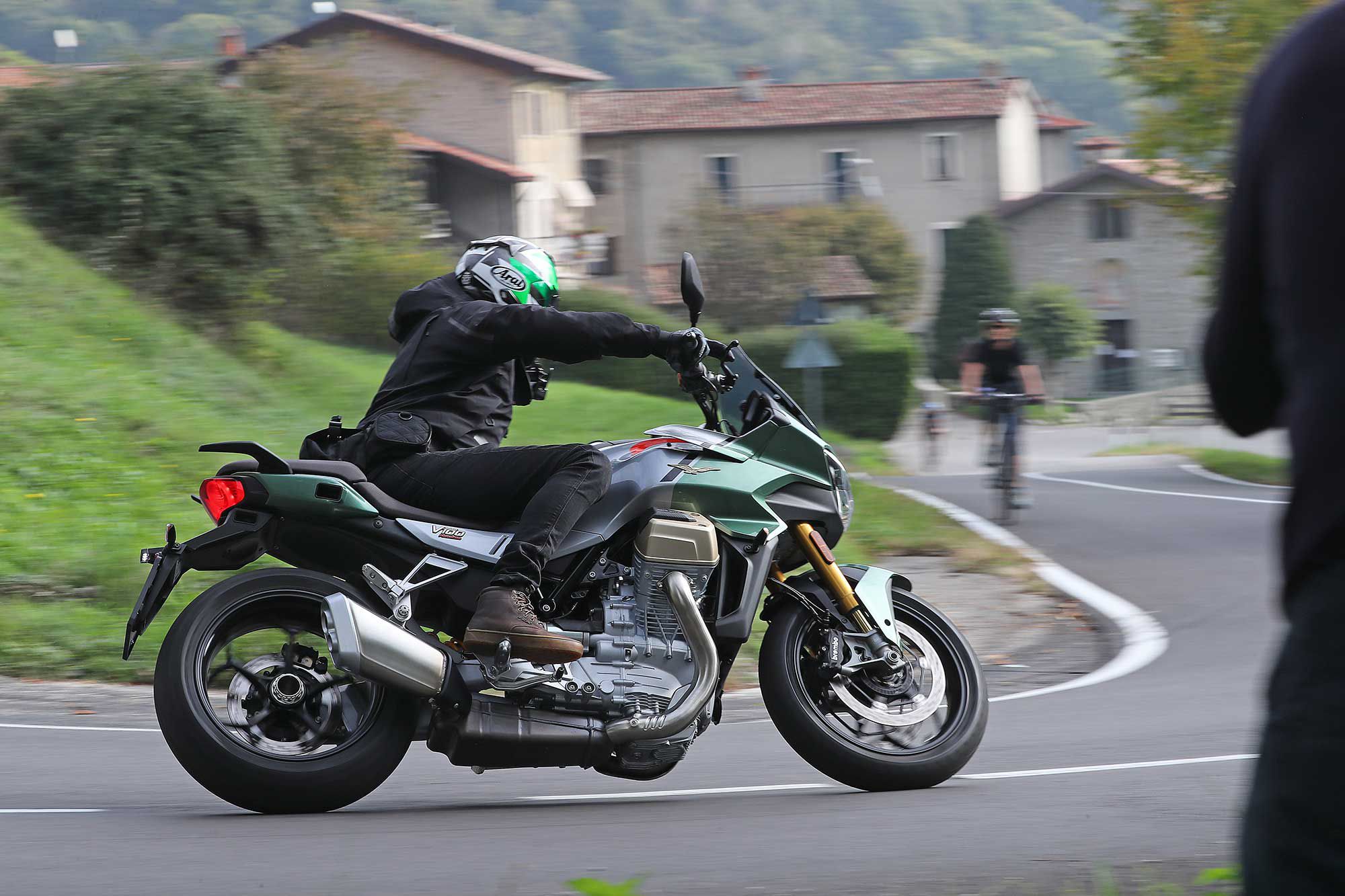 In spite of its 514-pound curb weight, the V100 Mandello is an agile streetbike. (Piaggio Group/) The Moto Guzzi Mandello V100 S gets the same 5-inch color TFT display that the Piaggio Group uses on its other bikes, including the Aprilia RSV4. It’s a much improved setup with a pleasing user interface. (Piaggio Group/) 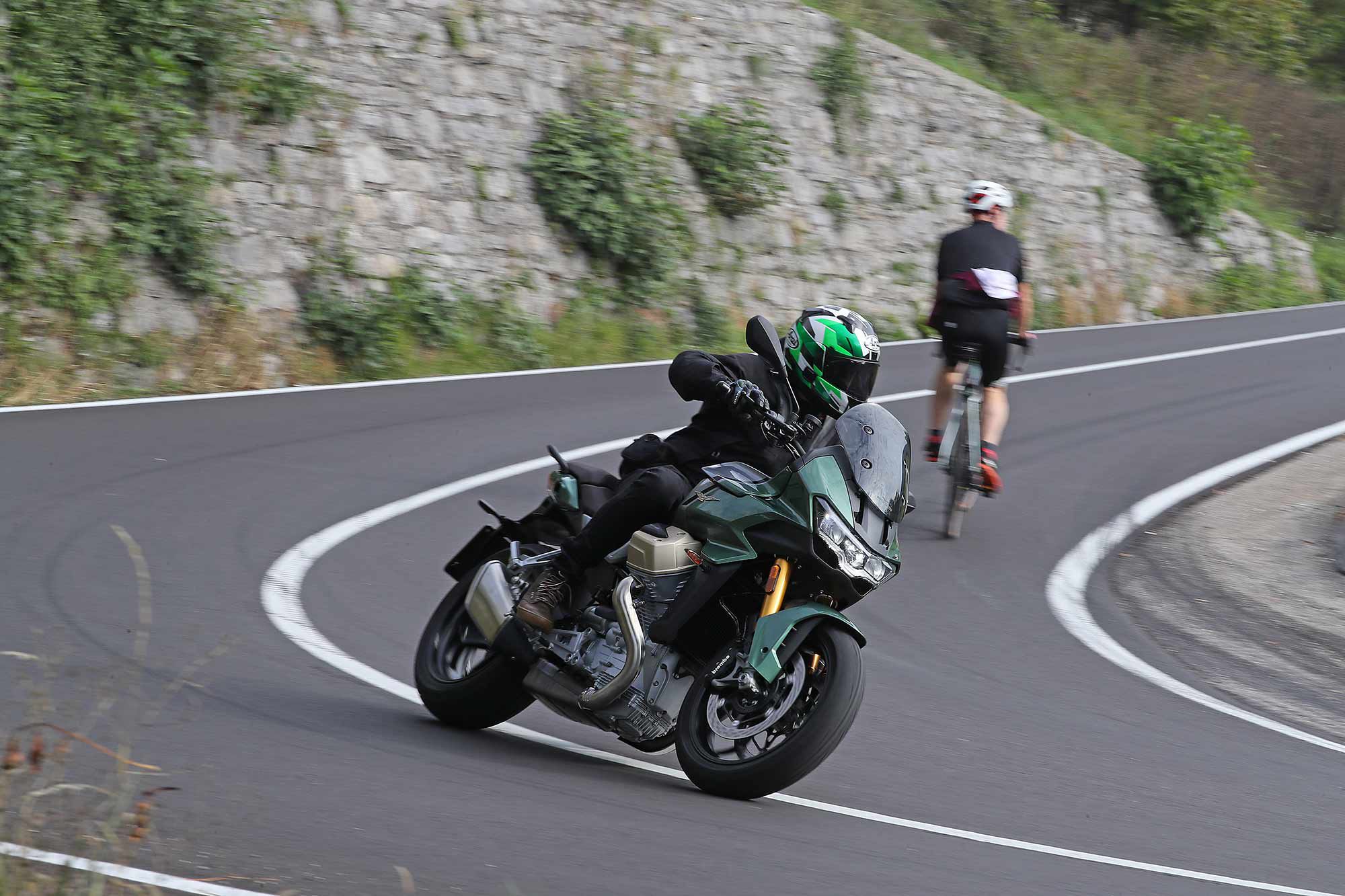 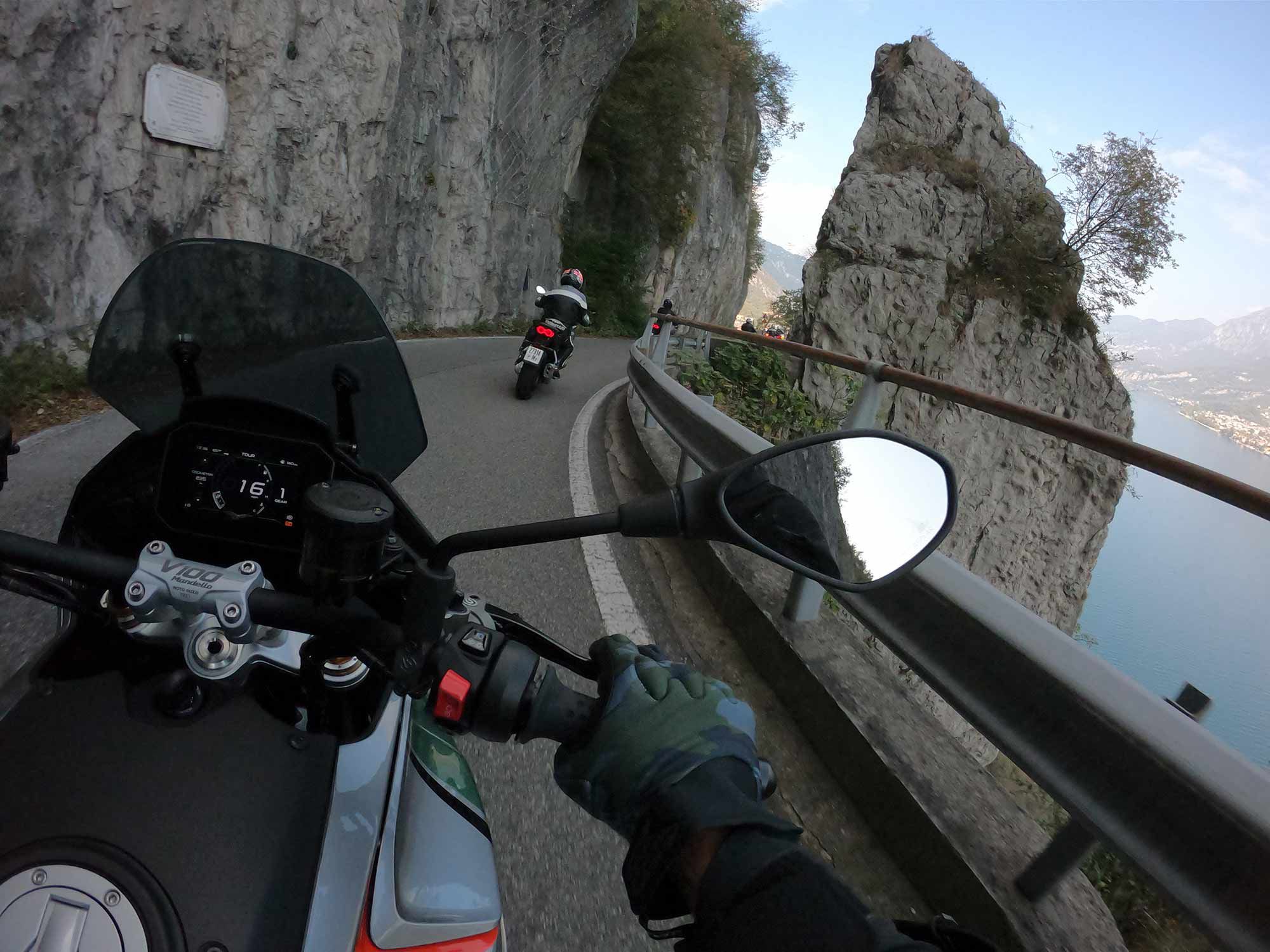 Moto Guzzi’s 2023 V100 Mandello is well suited to both urban touring riders and motorcyclists looking to escape the confines of the city. (Piaggio Group/) 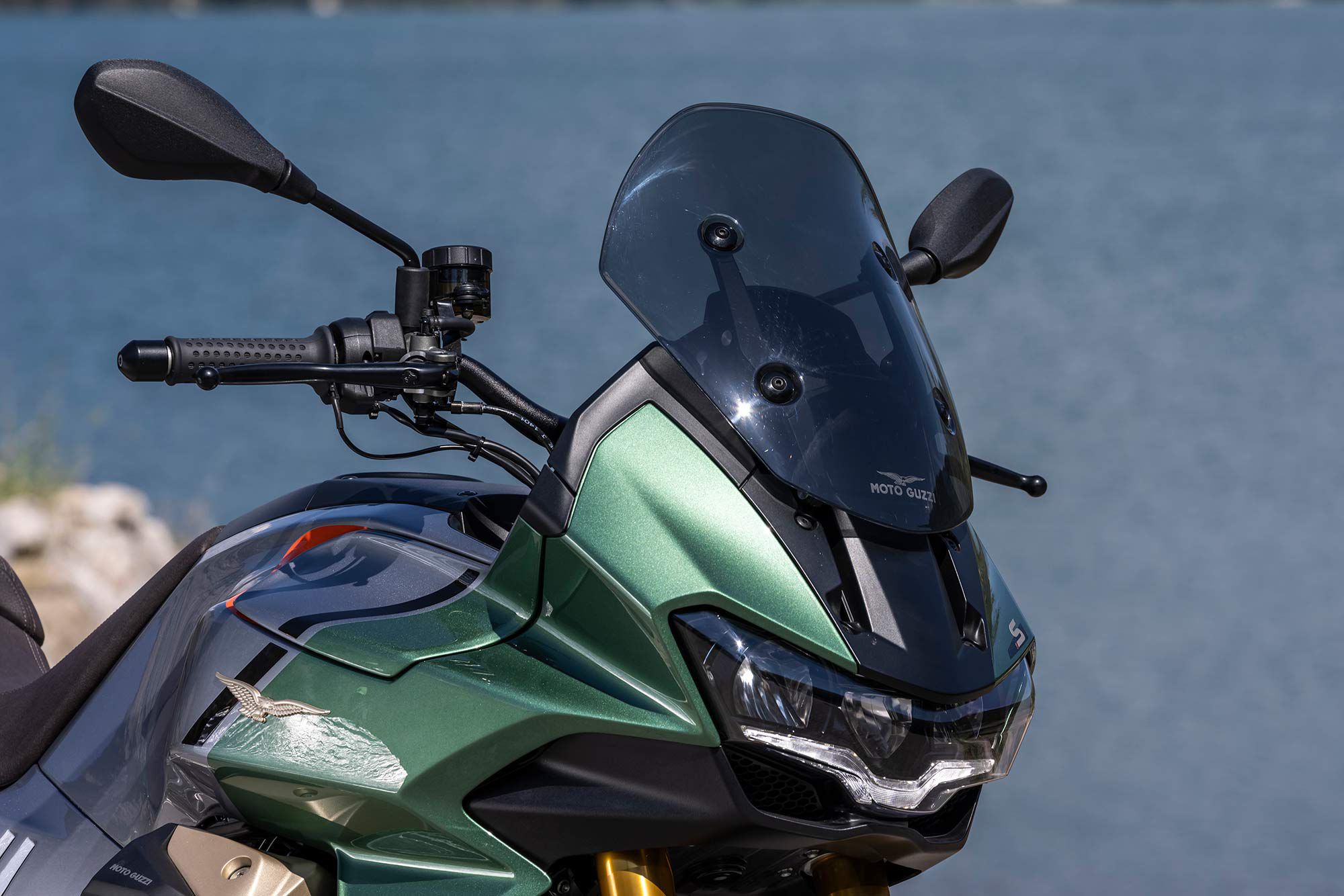 An electronically adjustable windscreen is standard equipment on both Mandello models. It is easy to use and has an adequate range of adjustment. (Piaggio Group/) 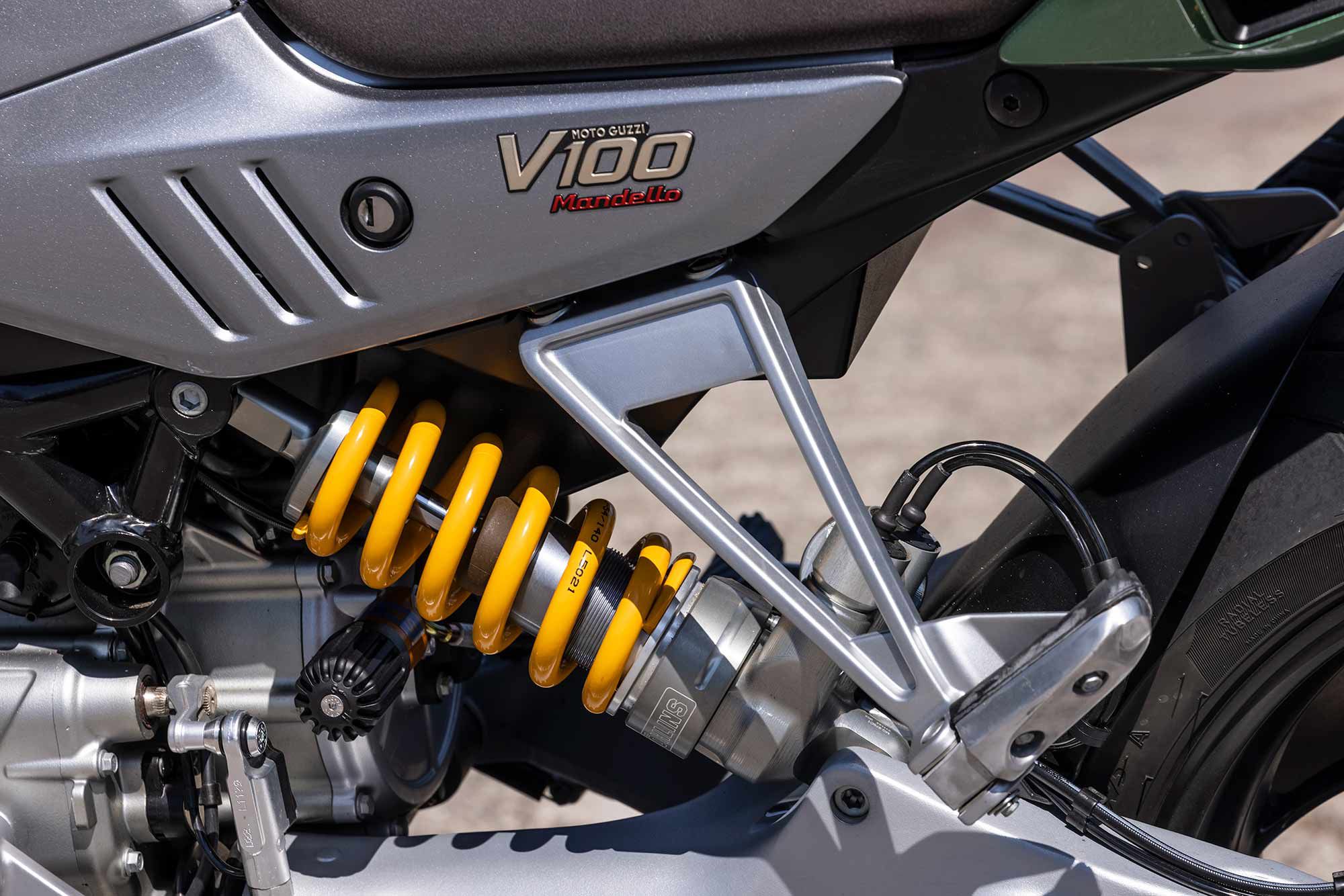 The up-spec S model benefits from semi-active suspension. The shock mounts directly between frame and swingarm without a linkage. (Piaggio Group/)